A little while ago my friend Eli acquired a bicycle.
Neither of our lives have been the same since.
For her part, things couldn't be better.  Her life was revolutionised by her bike.  She could get across town for free, without getting stuck in traffic, and without waiting around for a bus that was possibly late, or possibly had left a minute before she got to the bus stop.
Eli told me all this.  She told me all the reasons why bicycles are good and every other form of transport, including walking, is bad.
She told me.
A lot.
Loudly.
In the past, when I looked enviously upon those cool cyclist chicks that zoomed around Wellington, managing to look simultaneously stylish, sporty, and environmentally-conscious, my only consolation was that at least Eli wasn't one of them too.  That would really be too much.
And that's why, on my part, life got a little bit worse once the bicycle came into her life.  Eli took every opportunity to rub it in my face that she was a cyclist and I wasn't (by which she really meant that she was a good person and I was spawn of the devil).
Reh!
Oh yes, and she also developed the habit of saying "Reh!" after every anecdote that proved how much better her bicycle-filled life was than my bicycle-less life could ever be. 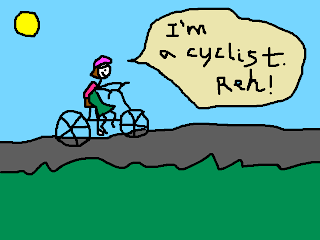 It was annoyingly effective.
So I found myself with two choices.  Endure her gloating noises until one of us died, or get a bicycle myself, and become one of those annoyingly perfect Wellington women that makes everyone in cars and buses feel bad about themselves.  It was a tough choice.
I chose the bicycle.  If only to save a life.
And last night, I rode home for the first time...
I have never felt so alive!  It was way faster than the bus!  And it didn't cost me a thing!  And I didn't leave a carbon footprint!  And I felt amazing!  Why the heck didn't I do this before?  How did I even live before?  How do others live without one now?  I must rush out and find someone who doesn't ride a bicycle, and tell them what they are missing...(Reh!) 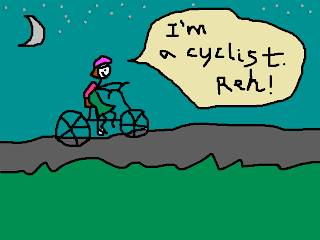 Just wait until it rains....

Gotta get full mudguards, then it's not so bad. Plus walking into the office literally steaming is kinda fun.

totally! I recommend (ugly but super awesome) Kathmandu microfleece gloves for Winter morning rides cos your fingers get freezedly. And wearing a tshirt under your windbreak, sweat away and then change when you get to work! Oh and get a sexy old gran basket on the front! Yay for bikes! Reh!

I have read your whole blog, it makes me happy. You are wonderful, and congrats on joining the two wheeler crowd! xxkt

I am obsessed with this piece of writing. I´m not sure what ¨reh¨ actually sounds like in live Anna/Eli audio version...but I might try to incorporate it into Anna Number 2 vocab. Hope you are well!

"Reh" sounds like a food processor trying to blend frozen things, if that helps...