But when I got back from Rarotonga, nobody asked me what the worst thing was.  (I would have said it was the milkshake place being closed one day).  They all asked me what the highlight was.
So, okay.  You're all nicer people than me.

The highlight was "Banana". 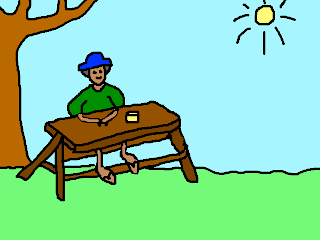 We met "Banana" sitting on a park bench under a tree with a tin of condensed milk.   He told us he was from one of the outer islands and his real name was Na, "but you can call me Banana" he said.
I felt an immediate affinity with this man who shared my nickname and my love of condensed milk.

Banana asked us where we were from.  New Zealand, we replied.
"My wife is from New Zealand" he said.  "Sue Watson?*" he added with raised eyebrows (not because he was unsure of her name, but since in New Zealand everybody knows each other).
We didn't know her.  (I'm sure we know her second cousin's daughter's teacher's friend or something similar.  Possibly we are her second cousin's daughter's teacher's friends or something similar).

For the next hour or so, we were Banana's captive audience.
He told us many things.  He told us how he met Sue Watson (she wrote him a letter inviting him to meet her at the fish and chip shop).  He told us what to do if we stepped on a stonefish (something to do with bashing open a nut).  He even told us how to wear sunglasses, "for supporting the eyes" (complete with detailed demonstration).

When we finally stood up to go, instead of a goodbye, he gave us a detailed description of his life, from birth, right up until that moment.  Then he gave us his phone number in case we were ever on his island and wanted to go fishing, and sent us on our merry way.

He was the highlight of my holiday.
And he'll never even know it.
Posted by anna-grams at 10:00 AM

He'll never know it....BUT he will hopefully remember the invitation when we turn up on his front step ready for our next holiday!

Well, you could call him and tell him? You have his number.

An excellent point Robbie! "Hi Banana, I'm the girl you met under a tree in Rarotonga..."