I was just off to bed the other night when my flatmate Aaron called after me, "hey!  Isn't it awesome how we get to choose our own bedtimes now?  We can stay up as late as we want!"

It's so reassuring that other people have these epiphanies too.  I have them constantly.  But I had always taken that as a sign that I wasn't a proper grown-up yet.
Proper grown-ups never stop to exalt the fact they can stay up late.
Proper grown-ups do things in the correct order.  They have already moved through a suitable level of rebellion and experimentation at the correct age, that has perversely equipped them with the ability to be responsible adults.
They have emerged from university with the exact knowledge of what they want to do with their entire life (and the 5 year plan to achieve it), and they have put down a deposit on a house at the appropriate time.

They certainly don't run around with cardboard boxes on their heads rejoicing at the lack of parental guidance in their (rented) house.

Hypothetically, I could eat as much raw cookie dough as I want, and not ever make my bed in the mornings, and throw my clothes on the floor, and stay in my pyjamas until teatime, and put off doing laundry for so long that I end up wearing my togs on washing day, and there wouldn't be a thing anybody could do to stop me!

How recklessly irresponsible!  Who is letting me get away with this kind of freedom?  Where did all the rule-enforcers go?  I can't believe I get to live with my friends, with no adult supervision, and go to bed whenever I like!

Why, if I wanted to,  I could go completely off the rails!!

But I don't want to.

I want to go to bed.  Immediately.

(Freedom is the right to choose.) 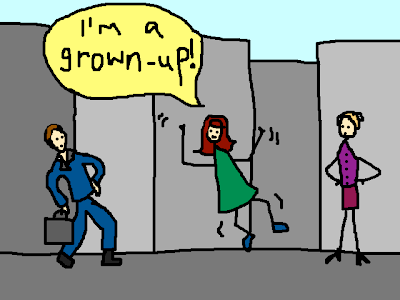